“Mishaps” will not stick on you: Movingfluid is the plant solution that was missing

In this article you will learn how Movingfluid’s consultancy made it possible to achieve a very ambitious goal for Henkel Adhesive Technologies: to automate the process of glue dilution in industrial production plants, eliminating any possibility of errors.
The high-tech solution we proposed proved to be effective in response to various requests from the customer.
How can constant, optimal dilution of the glue be guaranteed without fluctuations in the percentage of components? How can the industrial plant be optimised so as to record its consumption and be able to draw up reports for each of its lots? Finally: how to set the correct parameters and program subsequent production lines for a process that can be carried out independently, while ensuring top quality?

After several “it can’t be done” from other suppliers, Henkel turned to our engineering firm. What others cannot do, do not want to do or can no longer do is our daily bread. When the project is so ambitious that it seems like a pipe dream, Movingfluid will steal the scene. Just like the customer prefers.

Do you think you can’t do it due to an insurmountable “mishap”? For us, it is exactly the right start!

SET A CALL WITH US

Copy-paste no longer works: Henkel and the emphasis on innovation

Raise your hand if you don’t immediately link glue to Henkel’s name in your mind. This brand has entered our homes giving life to experiences we can’t but remember. Even if only for those “little jobs” we did as children.
It is not a coincidence. Because this brand is completely focused on the final consumer’s and its customers’ satisfaction through gratifying experiences and ongoing innovation. Adhesives, sealants and functional coatings, but not only.
Founded in 1876, Henkel now employs more than 52,000 people worldwide. Effective solutions and reliable brands – such as Pritt and Loctite – make Henkel a leader in today’s markets and an instrumental player in creating those of tomorrow. The ultimate goal is to generate value for people, society, the environment.

You can, therefore, figure out what it really meant for Movingfluid to support such a brand of excellence, so insightful with its technological solutions as to transform entire industrial sectors worldwide with its engineering consultancy.
The result of this collaboration was the development of a dilution system that can be used universally, in any plant and production line for glue and other mixtures.

A zero-risk solution: Movingfluid and the contractual advantages for the customer

Henkel’s Tissue Italia Sales Manager contacted us as fluid handling experts and specifically referred to the company’s desire to build an industrial plant to:

Not only that: the new plant was required to produce a quality result and the traceability of each batch.

All or nothing. Movingfluid likes these challenges, so much so that our contractual conditions are based on the actual ability to implement. You will only pay if what you say is really done.
According to Movingfluid methodology, the study, design and construction of a plant are considered to be at zero risk for the customer. Any cost in the analysis and prototyping steps is fully paid in advance by Movingfluid.

Another important plus of Movingfluid’s service is branding all the documentation relating to the industrial plant supplied, from customised manuals to recoding of single components, with the customer’s logo, in order to fully integrate any parts within the company’s coding system.
A time-consuming task, which requires accuracy and the specific knowledge of each element involved, and which often weighs on the company’s R&D office, absorbing major resources, which should deal with other priority tasks.
At this stage of total customisation, Movingfluid’s support will also prepare, if required, all the system-related documentation in multiple languages.

Have you been wanting to recode the components of your system and to draw up a customised manual with your logo for a long time, but there are always other priorities in the company? Entrust us with this task!

If that’s the way it has always been done, it’s time for a change! The creation of a new system that is bound to change the market

Taking note of Henkel’s idea, our engineering consultants got started with a feasibility study, according to the following steps:

The glue dilution system developed by Movingfluid fully met the customer’s expectations. Below is a drawing showing the finished system.

How does the glue dilution system work in detail?

The system uses a double diaphragm pneumatic pump which, through a pipeline, conveys the base glue contained in a 1000 L tank into a tank equipped with a mixer stirrer. The water for diluting the glue is also injected into the same tank, taken from the water mains or through a double membrane pump.
Load cells on which the tank is mounted make it possible, at this point, to calculate, by measuring the weight, the percentage of product and water, constantly ensuring that dilution is correct.
How? Proportion accuracy is controlled by a PLC (Programmable Logic Controller) in which a recipe has been set with the percentages of base glue and water.
The recipe of the preparation can be stored and used according to the current production. Up to 99 different recipes can be stored!
While a stirrer keeps the diluted glue properly mixed, a pneumatic membrane pump sends the glue to the gluing machine or to the tank near the machine.
The load cells then send the weight measured inside the tank to the PLC, ensuring that the product is constantly available. Any lack of the latter will generate an alarm signal, making it possible to take timely action, without any errors adversely affecting the production chain. 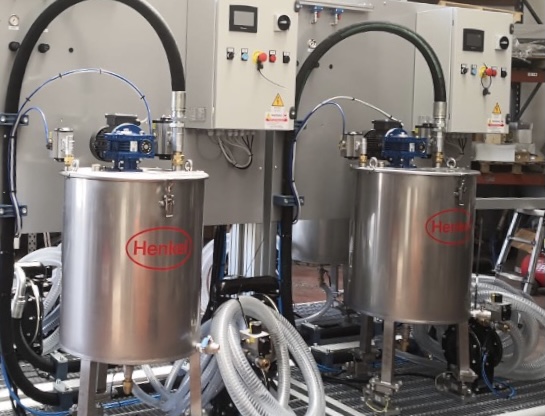 All the glue dilution system’s functions are constantly monitored and controlled by the Programmable Logic Controller, to avoid the occurrence of any errors that could modify or alter the quality of production.
The system designed by Movingfluid’s fluid handling specialists, indeed not only provided an effective response to Henkel’s specific need, but also an element capable of streamlining any existing plant, not only in the chemical industry.

A plant with a technological structure such as the one described above brings us into the typical logic of Industry 4.0, providing the complex with features such as complete automation and set-up for interconnection with the industrial context.

A process configured like this paves the way to two valuable opportunities:

A load of productive and commercial benefits for the customer

The system designed by Movingfluid has fully met Henkel’s expectations, even exceeding the expected results. As a result of the proactive attitude underlying our philosophy, the value of Movingfluid’s engineering consultancy was revealed. Effective, unique plant solutions are the result of our deep experience in fluid handling. We are not here to supply you with a product: we are here to find the best solution for you, without limits of imagination.

Our fully automatic solution ensures total safety. The system operates unmanned, with operators being only required when an alarm is triggered alerting to a lack of material or a malfunction.
The ultimate outcome is, therefore, streamlined production without any downtime: processing times are optimised and the quality of the outgoing product is consistent and guaranteed.
Not only that: the inclusion of recipes and the ability to program them makes it possible to set up production work over long periods.

In detail, the advantages are as follows:

In addition to the plant, Movingfluid has also generated all the accompanying, Henkel-brand customised documentation in the required languages, including the customisation of all PLC (Programmable Logic Controller) related pages, thus providing a complete support service as a real external Research and Development office.

If you still have doubts, why don’t you try asking us directly?

In addition to the chemical industry, Movingfluid also directs its consulting services to other areas, such as the automotive, oenology, ceramics industries, and many others.

Would you like to learn more about the “mishaps” solved by Movingfluid in other industrial sectors?

SEE OTHER CASE HISTORIES
Tag: Case History, Chemical, Dilution, Glue, Henkel
We study your idea and help you make it REAL, you will receive a feasibility study in 48h.
One of our experts will get in touch with you, now!
Do you want to contact us right now?
Topic